To Party Perchance to Party

To Party Perchance to Party

To Party Perchance to Party is the second episode of Sidekick.

The episode begins in the middle of one of the Sidekick Lesson videos, showing a battle between Maxum Man and The Extrapolator, and Maxum Man losing due to The Extrapolator's ability to predict all his attacks. Maxum Man then demonstrates the Sacrafice Save, a move where the Super throws his sidekick in a ball of energy at the villain, and defeats The Extrapolator. The video ends, and Eric asks why Maxum Man didn't just throw a rock, but everyone justs laughs at him for asking a seemingly dumb question. Kitty then says Maxum Man should have focused on Golly Gee Kid's skull instead of his whole body, thus making the attack more effective. She demonstrates this by breaking her desk in two with her head. Vana then comments sarcastically how attractive that was, and fixes her make-up while Eric fawns over her.

The bell rings and everyone leaves the class. Trevor tells Eric that they need to do domething fun for the weekend, and both of them hide in a nearby locker when they hear Vana and Kitty approaching. Trevor and Eric overhear Vana asking Kitty if she's reading for her party, and Kitty says that she has been practicing her partying skills all week. And cuts to her dancing in her room with lights and music, only to have it shut off. Kitty then runs away from Vana, crying. The guys then jump out and decide that they are going to Vana's party.

Eric and Trevor confront the girls about the party, but Trevor starttles them, and they attack the guys. Eric tells Kitty its just them, and she immediately apologizes and asks if he okay. Eric says he's fine, and Kitty admires how brave he is and tells him she loves him. Eric says "What?" with a questioning look on his face, and Kitty replies with her own "What?" to cover up her confesssion. Trevor then tells them they heard about Vana's party, but Vana says it's not really their kind of party. Eric and Trevor try to convince her by saying they like all kinds of parties, and then daydream about them. Eric daydreams about an Indian party, with him and four other boys dancing, while Eric flirts with Vana, who is dressed in an Indian garb. Trevor daydreams about playing an electric guitar while riding a pterodactyl with mustaches. When they come back to reality, Kitty and Vana have already left.

Eric and Trevor then start to get ready to crash Vana's party, when Maxum Brain tells them that the villain Drillaim Shakespere, a unicorn whose horn is a drill, has escaped and they need to take care of him since Maxum Man is still missing. Eric and Trevor complain that they can't because they have to go to a party tonight. Maxum Brain then shows them Drilliam destroying all their favorite hangout spots. Eric asks how long it will take, and Maxum Brain explains that there are 16 Stages to defeating Drilliam Shakespere, so it should take 5-6 hours. Trevor says that could take all week, and suggests that they just drop a rock on him. Maxum Brain trys to tell them it won't work, but the guys have already decided. They fly to Drilliam in the Maxum Jet and drop a huge rock on him, and then fly to Vana's house.

They ring the doorbell, but two large lasers pop out and point at the guys. Trevor says they're just intercoms, and when Eric tries to talk, they both get blasted by Vana and Kitty, who are controlling the house's security system. Trevor then puts on a suit of tin foil, which reflects the gun's lasers back them. But Vana aims a heat ray at Trevor, making a lame joke about how he resembles a baked potato. Eric then pulls out his Freeze Ray and freezes the heat ray. Vana then realeases robot walruses, since they love the cold, and beats up Eric. Trevor uses electric-based gloves to defeat the walruses, but his hands are crushed by the Finger Smasher. Eric and Trevor are about to give up and have their party, of sadness, when Drilliam Shakespere shows up. Eric says how it isn't a good time, because the party is about to end, and asks Trevor for the list of steps to defeat Drilliam. He tells Drilliam to prepare for the worst 5-6 hours of his life, and Drilliam says to do his worst.

It cuts to Drilliam beggin for mercy, laying on the ground in a crumpled heap with toilet paper toilet plungers, and various other seemingly random items on his body, while Eric pours sour milk on his face (Step 15). Eric then defeats Drilliam by using Trevor as part of the Sacrafice save, and smashes Drilliam into the side of Vana's house, opening a hole in the wall for Eric and Trevor to enter. They are about to run inside, when the sun rises and the party ends. Vana and Kitty walk outside to find Eric and Trevor crying, and ask what they're doing there, and the guys explain how they should've just beaten Drilliam in the first place so they could still go to the party, but now they can't. Kitty offers Eric a tissue, then a hug, then her eternal and eduring love, and Eric says "What?" and Kitty says "What?" to cover up her confession again. Vana takes pity on the guys and tell them they can party a little longer.

It turns out it really wasnt their kind of party, because it was your typical 12-year-old girl's party; a make-over party. Vana puts fire-engine-red lipstick on Trevor, saying how good it looks on him, and Trevor seems to be enjoying himself. Kitty then asks Eric if she can put lipstick on him, and he exits the scene saying that's enough 'partying', obviously expeting something more fun. 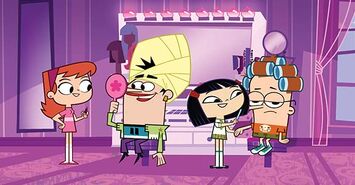