It is Halloween night in Splittsburo and Eric is thrilled to be celebrating the spooky holiday outside of the orphanage. This Halloween, Eric decides to be a clown, complete with a red clown nose and big blue clown shoes. Maxum Brain teases Eric for being so excited and Eric retorts that Maxum Brain is too uptight to see the fun of the holiday. Eric quickly sets out to meet up with Trevor, Kitty, and Vana. Kitty and Vana are dressed as Maxum Man. Trevor is dressed as Xoxum Man, which is a combination of both Master Xox and Maxum Man. Eric’s friends point out that everyone dresses like Maxum Man for Halloween; and after Eric trips on his big clown shoes, he wants a Maxum Man costume too. Eric, Trevor, Kitty, and Vana go to the only costume store still open. They meet a cranky wizard who has every costume imaginable, except a Maxum Man costume. The wizard is fed up with everyone wanting a Maxum Man costume because he believes Maxum Man is over glorified and unimaginative. Eric and his friends try to defend Maxum Man but the wizard is determined to change their minds. After their odd encounter with the wizard, the four sidekicks try to begin trick-or-treating. As the night continues, it comes to their attention that Vana, Trevor, Kitty, and anyone else dressed as Maxum Man have his super powers. Trevor also has Master Xox’s evil genius. To his dismay, Eric only receives super clown powers. Vana and Kitty begin to quarrel, which escalates to physical fighting. Trevor begins attacking himself as he is dressed as both Master Xox and Maxum Man. Suddenly, the whole town is fighting since everyone wants to play the hero. It is up to Eric to save the day. Eric returns to the costume shop to confront the wizard. The wizard reveals that he was once Maxum Man’s tailor but was fired and lost his reputation. Ever since, the wizard vowed to convince the world that Maxum Man is not as great as everyone believes him to be. Eric uses his clown powers to tie the wizard up and stuff him into a small clown car. Eric retrieves the wizard’s staff and breaks it, which turns everyone back to normal. Eric, Kitty, and Vanna return to the Maxum Man Mansion and lament over the fact their Halloween night was spent fighting instead of trick-or-treating. Trevor joins them and points out that Maxum Brain has a huge wagon full of candy. Maxum Brain, in spite of previously mocking the idea of Halloween, was out trick-or-treating. Maxum Brain reluctantly gives up his candy for the kids. As he and his friends gorge on candy, Erin declares that he loves Halloween.

"HEY, you try seeing with this big red clown nose between your eyes!" - Eric 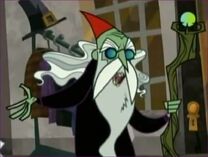